Krypton atoms have 36 electrons and the shell structure is 2.8.18.8. The ground state electronic configuration of neutral krypton is [Ar].3d10.4s2.4p6 and the term symbol of krypton is 1S0.

Krypton is present in the air at about 1 ppm. The atmosphere of Mars contains a little (about 0.3 ppm) of krypton. It is characterised by its brilliant green and orange spectral lines. The spectral lines of krypton are easily produced and some are very sharp. In 1960 it was internationally agreed that the fundamental unit of length, the metre, should be defined as 1 m = 1,650,763.73 wavelengths (in vacuo) of the orange-red line of Kr-33.

Under normal conditions krypton is colourless, odourless, fairly expensive gas. Solid krypton is a white crystalline substance with a face-centered cubic structure which is common to all the "rare gases". Krypton difluoride, KrF2, has been prepared in gram quantities and can be made by several methods. 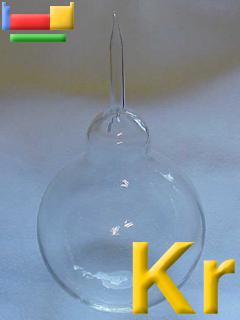 Krypton has no biological role.

Reactions of krypton as the element with air, water, halogens, acids, and bases where known.

Isolation: krypton is present to a small extent (about 1 ppm by volume) in the atmosphere and is obtained as a byproduct from the liquefaction and separation of air. This would not normally be carried out in the laboratory and krypton is available commercially in cylinders at high pressure.