Radium atoms have 88 electrons and the shell structure is 2.8.18.32.18.8.2. The ground state electronic configuration of neutral radium is [Rn].7s2 and the term symbol of radium is 1S0.

Pure metallic radium is brilliant white when freshly prepared, but blackens on exposure to air, probably due to formation of the nitride. It exhibits luminescence, as do its salts; it decomposes in water and is somewhat more volatile than barium. Radium imparts a carmine red colour to a flame. 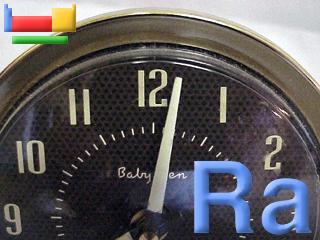 Radium paint was used in the mid 1900s to paint the hands and numbers of some clocks and watches. The paint was composed of radium salts and a phosphor and glowed in the dark. Image adapted with permission from Prof James Marshall's (U. North Texas, USA) Walking Tour of the elements CD.

Radium has no biological role.

Reactions of radium as the element with air, water, halogens, acids, and bases where known.

Radium was discovered by Pierre and Marie Curie in 1898 at France. Origin of name: from the Latin word "radius" meaning "ray".

Isolation: all isotopes of radium are radioactive and there is only ever any need to make radium metal on very small scales for research purposes. Radium is extremely scarce but found in uranium ores such as pitchblende at slightly more than 1g in 10 tonnes of ore. It may be made on very small scale by the electrolysis of molten radium chloride, RaCl2. This was first done using a mercury cathode, which gave radium amalgam. The metal was obtained by distillation away from the amalgam.