The following uses for uranium are gathered from a number of sources as well as from anecdotal comments. I would be delighted to receive corrections as well as additional referenced uses.

Uranium gives interesting yellow and green colours and fluorescence effects when included to glass in conjunction with other additives. The image below is a Czech late 19th Century "Moser" Karlsbad vase showing a characteristic yellow-green colour. The image is reproduced with the permission of Ken Tomabechi at the Uranium Glass Gallery in Japan, where you can find further information about uranium glass. This type of glass is sometimes referred to as "vaseline glass" in the UK and USA and as "Annagelb" (yellow) or "Annagruen" (green) in Germany. 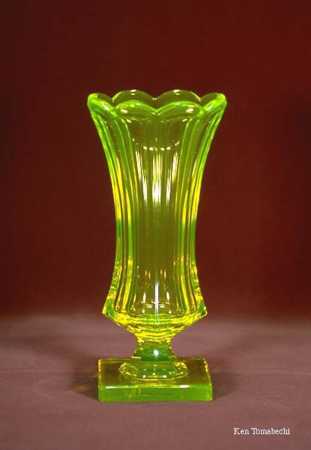