Americium atoms have 95 electrons and the shell structure is 2.8.18.32.25.8.2. The ground state electronic configuration of neutral americium is [Rn].5f7.7s2 and the term symbol of americium is 8S7/2.

The lustre of freshly prepared americium metal is whiter and more silvery than plutonium or neptunium prepared in the same manner. Americium is a component of the smoke detector above.

Americium appears to be more malleable than uranium or neptunium and americium tarnishes slowly in dry air at room temperature. Americium is a radioactive rare earth metal which must be handled with care to avoid contact, since it is a heavy α and γ emitter. It is named after America. The α activity of 241Am is about three times that of radium. Americium is available to qualified users in the UK and in the USA. 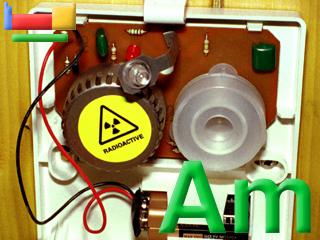 Americium is a key component of some smoke detectors.

Americium has no biological role.

Reactions of americium as the element with air, water, halogens, acids, and bases where known.

Americium was discovered by Glenn Seaborg, Ralph James., L. Morgan, Albert Ghiorso in 1944 at USA. Origin of name: from the English word "America".