Palladium atoms have 46 electrons and the shell structure is 2.8.18.18.0. The ground state electronic configuration of neutral palladium is [Kr].4d10 and the term symbol of palladium is 1S0.

Palladium is a steel-white metal, does not tarnish in air, and is the least dense and lowest melting of the platinum group metals. When annealed, it is soft and ductile. Cold working increases its strength and hardness. It is used in some watch springs.

At room temperatures the metal has the unusual property of absorbing up to 900 times its own volume of hydrogen. Hydrogen readily diffuses through heated palladium and this provides a means of purifying the gas. 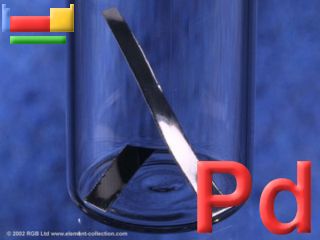 Palladium has no biological role. Palladium chloride was formerly prescribed as a treatment for tuberculosis at the rate of 0.065 g per day (approximately 1 mg kg-1) without too many bad side effects.

Reactions of palladium as the element with air, water, halogens, acids, and bases where known.

Palladium was discovered by William Hyde Wollaston in 1803 at England. Origin of name: named after the asteroid "Pallas" which was discovered at about the same time and from the Greek name "Pallas", goddess of wisdom.

Pd-104 is used for the production of radioactive Pd-103 seeds which are used to fight prostate cancer. Pd-103 can also be made from Pd-102. Other Pd isotopes such as Pd-110 and Pd-108 have been used in physical experiments such as research into the decay of Nd-137 and nuclear fusion phenomena. Pd-108 can also be used for the production of radioactive Pd-109 which is used for cancer therapy.