Xenon is a "noble" or "inert" gas present in the atmosphere to a small extent. Xenon is present in the Martian atmosphere to the extent of about 0.08 ppm. Before 1962, it was generally assumed that xenon and other noble gases were unable to form compounds. Among the compounds of xenon now reported are xenon hydrate, sodium perxenate, xenon deuterate, difluoride, tetrafluoride, hexafluoride, and XePtF6 and XeRhF6. The highly explosive xenon trioxide, XeO3, is known.

Metallic xenon is produced by applying several hundred kilobars of pressure. Xenon in a vacuum tube produces a blue glow when excited by an electrical discharge and finds use in strobe lamps. It is an odourless, colourless, inert gas. 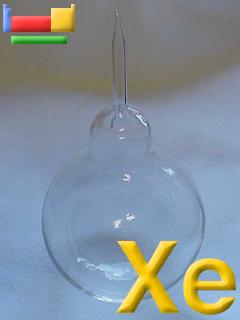 Xenon has no biological role.

Reactions of xenon as the element with air, water, halogens, acids, and bases where known.

Xenon was discovered by Sir William Ramsay, Morris W. Travers in 1898 at England. Origin of name: from the Greek word "xenos" meaning "stranger".

Of the nine stable Xenon isotopes, several are used in various medical and scientific applications. Xe-124 is used in the production of two radioisotopes: I-123 and I-125. I-123 is used extensively in diagnostic procedures while I-125 is used in the treatment of prostate cancer. Hyperpolarized Xe-129 is used in the magnetic resonance imaging of gas flows in the lungs. Xe-136 has been proposed as a detector for neutrinoless double Beta decay research. Xe-126 can be used as a target for the production of radioactive Ba-128.

Isolation: xenon is present to a small extent in the atmosphere (less than 1 ppm by volume) and is obtained as a byproduct from the liquefaction and separation of air. This would not normally be carried out in the laboratory and xenon is available commercially in cylinders at high pressure.