Technetium atoms have 43 electrons and the shell structure is 2.8.18.14.1. The ground state electronic configuration of neutral technetium is [Kr].4d5.5s2 and the term symbol of technetium is 6S5/2.

Since its discovery, searches for the element technetium in terrestrial materials have been made without success. Technetium has been found in the spectrum of S-, M-, and N-type stars, and its presence in stellar matter is leading to new theories of the production of heavy elements in the stars.

Technetium is a silvery-grey metal that tarnishes slowly in moist air. Until 1960, technetium was available only in small amounts. The chemistry of technetium is related to that of rhenium. 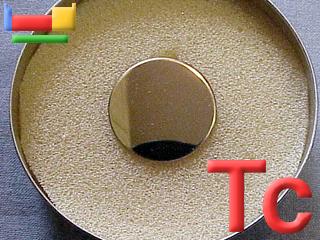 There is a thin plating of technetium-99 on this disk and this radioactive sample gives about 200 counts per minute. Image adapted with permission from Prof James Marshall's (U. North Texas, USA) Walking Tour of the elements CD.

Technetium has no biological role. Technetium does not occur naturally in the biosphere and so normally never presents a risk. All technetium compounds should be regarded as highly toxic, largely because of its radiological toxicity.

Reactions of technetium as the element with air, water, halogens, acids, and bases where known.

Technetium was discovered by Carlo Perrier, Emilio Segre in 1937 at Italy. Origin of name: from the Greek word "technikos" meaning "artificial".

Isolation: it is never necessary to make a sample of techntium anywhere other than specialist laboratories. This is because technetium is radioactive. Technetium is a byproduct of the nuclear industry and is a product of uranium decay. Alternatively it can be made by the bombardment of molydenum targets with deuterium nuclei.

Because of the scale of the nuclear industry it is possible to make quite large quantities of technetium (kilograms). The metal itself may be made by the reaction of the sulphide Tc2S7 with hydrogen at 1100°C or of the pertechnate NH4TcO4 with hydrogen.