The name iridium is appropriate, for its salts are highly coloured. Iridium is white, similar to platinum, but with a slight yellowish cast. It is very hard and brittle, making it very hard to machine, form, or work. It is the most corrosion resistant metal known, and was used in making the standard metre bar of Paris, which is a 90% platinum-10% iridium alloy. This metre bar has since been replaced as a fundamental unit of length (see Krypton).

Iridium is not attacked by any of the acids nor by aqua regia, but is attacked by molten salts, such as NaCl and NaCN. 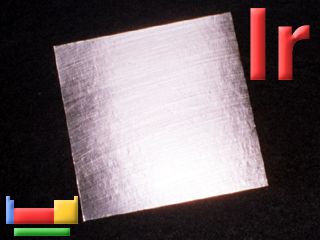 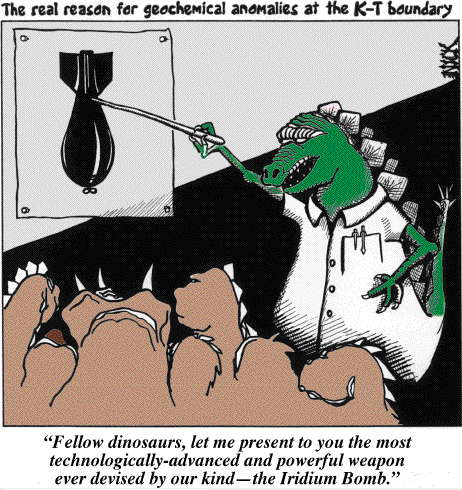 Iridium has no biological role.

Reactions of iridium as the element with air, water, halogens, acids, and bases where known.

Iridium has two isotopes, Ir-191 and Ir-193 and both are used in the production of radioactive material. Ir-191 is used for the production of radioactive Ir-192. This Ir-192 is used as a radiation source in gamma cameras that are used for non-destructive testing. Ir-192 sources are also used in so-called brachytherapy procedures whereby radioactive materials are placed in close contact with the tissue being treated. Although Ir-192 can be produced from natural Ir, the use of enriched Ir-191 gives a much higher specific activity and allows the use of smaller sources. The use of Ir-193 has been suggested for the production of the therapeutic radioisotope Pt-195m.

Isolation: it would not normally be necessary to make a sample of iridium in the laboratory as the metal is available, at a price, commercially. The industrial extraction of iridium is complex as the metal occurs in ores mixed with other metals such as rhodium, palladium, silver, platinum, and gold. Sometimes extraction of the precious metals such as iridium, rhodium, platinum and palladium is the main focus of a partiular industrial operation while in other cases it is a byproduct. The extraction is complex because of the other metals present and only worthwhile since iridium is useful as a specialist metal and is the basis of some catalysts in industry.

Preliminary treatment of the ore or base metal byproduct is required to remove silver, gold, palladium, and platinum. The residue is melted with sodium bisulphate (NaHSO4) and the resulting mixture extracted with water to give a solution containing rhodium sulphate, Rh2(SO4)3. The insoluble residue contains the iridium. The residue is melted with Na2O2 and extracted into water to remove ruthenium and osmium salts. The residue contains iridium oxide, IrO2. Dissolution of the oxide in regia (a mixture of hydrochloric acid, HCl, and nitric acid, HNO3) gives a solution containing pure (NH4)3IrCl6. Evaporation to dryness and burning under hydrogen gas gives pure iridium.