Silver atoms have 47 electrons and the shell structure is 2.8.18.18.1. The ground state electronic configuration of neutral silver is [Kr].4d10.5s1 and the term symbol of silver is 2S1/2.

Silver is somewhat rare and expensive, although not as expensive as gold. Slag dumps in Asia Minor and on islands in the Aegean Sea indicate that man learned to separate silver from lead as early as 3000 B.C. Pure silver has a brilliant white metallic lustre. It is a little harder than gold and is very ductile and malleable. Pure silver has the highest electrical and thermal conductivity of all metals, and possesses the lowest contact resistance. Silver iodide, AgI, is (or was?) used for causing clouds to produce rain.

Silver is stable in pure air and water, but tarnishes when exposed to ozone, hydrogen sulphide, or air containing sulphur. It occurs in ores including argentite, lead, lead-zinc, copper and gold found in Mexico, Peru, and the USA. 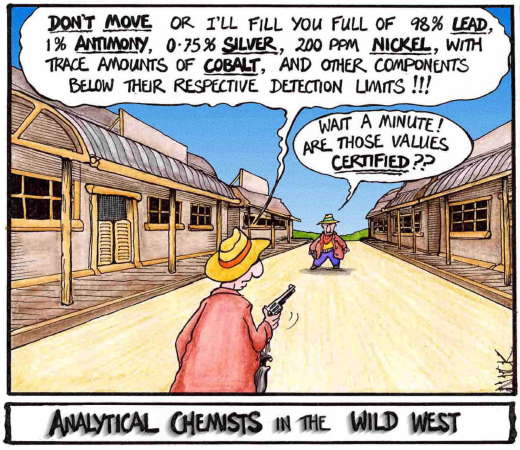 Silver has no biological role.

Reactions of silver as the element with air, water, halogens, acids, and bases where known.

Silver was discovered by Known since ancient times in unknown at not known. Origin of name: from the Anglo-Saxon word "siolfur" meaning "silver" (the origin of the symbol Ag comes from the Latin word "argentum" meaning "silver").

Isolation: silver is readily available commercially so it is not normally necessary to prepare silver in the laboratory. However the formation of silver metal may be demonstrated in a satisfying reaction in which copper metal is dipped into a solution of silver nitrate, AgNO3.

The result is formation of often attractive silver crystals and a blue-green solution of copper nitrate. Industrially, silver is usually a byproduct of processes whose main object is the extraction of another metal such as copper, lead, and zinc. So called "anode slimes" from the electrolytic purification of copper contain silver and a somewhat involved process is finished by an electrolysis of a nitrate solution containing silver.