Dysprosium atoms have 66 electrons and the shell structure is 2.8.18.28.8.2. The ground state electronic configuration of neutral dysprosium is [Xe].4f10.6s2 and the term symbol of dysprosium is 5I8.

Dysprosium has a metallic, bright silver lustre. It is relatively stable in air at room temperature, but dissolves readily, with the evolution of hydrogen, in mineral acids. The metal is soft enough to be cut with a knife and can be machined without sparking if overheating is avoided. It is a rare earth metal found in minerals such as xenotime, monazite and bastnaesite. 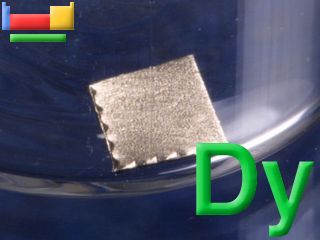 Dysprosium has no biological role.

Reactions of dysprosium as the element with air, water, halogens, acids, and bases where known.

Dysprosium was discovered by Paul Emile Lecoq de Boisbaudran in 1886 at France. Origin of name: from the Greek word "dysprositos" meaning "hard to obtain".

Many of the Dy isotopes have been the subject of physics research. Dy-156 has been used to study double electron capture while Dy-160 has been used in research to investigate its multitude of excited states. Dy-161 spectroscopy has been used to determine the properties of Dy based superconductor material. Dy-162 has been used to study excited states in deformed nuclei. Dy-164 has two medical applications. It is used in the production of Dy-165 which is used in arthritis therapy. Dy-164 is also used for the production of Dy-166 which decays to Ho-166 and this used in cancer therapy. The Dy-164 to Ho-166 route gives the advantage of generating so-called carrier free material.

Isolation: dysprosium metal is available commercially so it is not normally necessary to make it in the laboratory, which is just as well as it is difficult to isolate as the pure metal. This is largely because of the way it is found in nature. The lanthanoids are found in nature in a number of minerals. The most important are xenotime, monazite, and bastnaesite. The first two are orthophosphate minerals LnPO4 (Ln deonotes a mixture of all the lanthanoids except promethium which is vanishingly rare) and the third is a fluoride carbonate LnCO3F. Lanthanoids with even atomic numbers are more common. The most comon lanthanoids in these minerals are, in order, cerium, lanthanum, neodymium, and praseodymium. Monazite also contains thorium and ytrrium which makes handling difficult since thorium and its decomposition products are radioactive.

Pure dysprosium is available through the reduction of DyF3 with calcium metal.

This would work for the other calcium halides as well but the product CaF2 is easier to handle under the reaction conditions (heat to 50°C above the melting point of the element in an argon atmosphere). Excess calcium is removed from the reaction mixture under vacuum.