Tellurium atoms have 52 electrons and the shell structure is 2.8.18.18.6. The ground state electronic configuration of neutral tellurium is [Kr].4d10.5s2.5p4 and the term symbol of tellurium is 3P2.

Crystalline tellurium has a silvery-white appearance, and exhibits a metallic lustre when pure (see above). It is brittle and easily pulverised. Tellurium is a p-type semiconductor, and shows varying conductivity with crystal alignment. Its conductivity increases slightly with exposure to light. It can be doped with silver, copper, gold, tin, or other elements.

Humans exposed to as little as 0.01 mg m-3 in air, or less, develop "tellurium breath", which has a garlic-like odour. 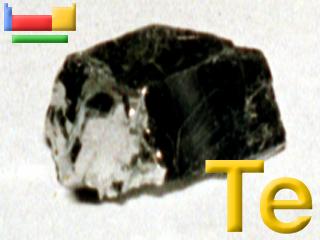 Tellurium has no biological role. All tellurium compounds are highly toxic.

Reactions of tellurium as the element with air, water, halogens, acids, and bases where known.

Tellurium was discovered by Franz Joseph Muller von Reichstein in 1783 at Romania. Origin of name: from the Latin word "tellus" meaning "earth".

Isolation: it is not usually necessary to make tellurium in the laboratory as it is commercially available. While there are some tellurium ores, most tellurium is made as a byproduct of copper refining. Extraction is complex since the method emplyed will depend upon what other compounds or elements are present. The first step usually involves an oxidation in the presence of sodium carbonate (soda ash).

The tellurite Na2TeO3 is acidified with sulphuric acid and the tellurium precipitates out as the dioxide (leaving and selenous acid, H2SeO3, in solution). Tellurium is liberated from the dioxide by dissolving in sodium hydroxide, NaOH, and electroytic reduction.